Timber moisture testing in building surveying can be divided into the following three categories: 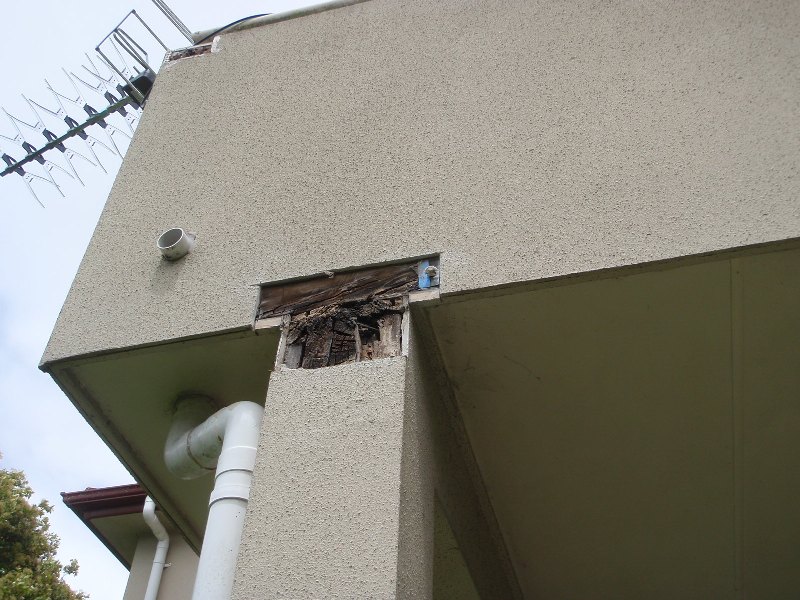 and followed by laboratory testing is the only way to reveal the timber frame condition of the subject building, but rarely used for a pre-purchase visual inspection if ever can be used at all due to its obvious physical damages to wall cladding.

Invasive testing
According to the AGREEMENT FOR SALE AND PURCHASE OF REAL ESTATE – Ninth Edition 2012, “The building inspector may not carry out any invasive testing in the course of inspection without the vendor's prior written consent”.

It is unlikely that any property owner will give permission to a potential buyer to do any probing invasive testing, such as using Trotec T500K, as damages to wall cladding still be substantial.

In the event of owner’s approval, pin point moisture meters such as Protimeter Mini or Trotec T500

may be used to interior surface such like on skirting boards, on particle floor boards, ceiling plaster board lining and etc. Readings from this type of invasive moisture meters only indicate the moisture content of the incipient surface, which normally be timber skirting board, plaster board, cork, wall paper or combination of some of them, which are not necessarily be a representative of moisture percentage of the underlying timber frame.

Unless otherwise stated and under a written approval of the vendor, invasive testing using pin point moisture meters will only be carried out to timber foundation structure or some parts of exterior wall cladding if necessary.

Non-invasive testing
None of currently available non-invasive moisture meters, such as Trotec T650 or Protimeter Aquant

can produce moisture content percentage of the material tested. The fact that, significant amount of pre-purchase or pre-sell inspection reports are giving moisture percentage readings for different areas or parts of buildings inspected, does not mean any revolutionary technology advancement. (also refer: http://bc.org.nz/moisture.html for further comments made by William Hursthouse regarding abused moisture testing within pre-purchase inspection industry ).

Depends on detection depth, which normally be within 20 – 40mm, moisture readings obtained with non-invasive type of moisture meters at best are indications of moisture contents of combination of all building materials directly behind the point being tested, which may include skirting board, wall paper, plaster board, insulation material, framing (timber or steel) member and etc. The relationship between non-invasive meter readings and timber moisture contents can only be interpreted by the building inspector based on his/her relevant building knowledge. When high readings can often indicate high moisture contents within underlying timber frame, there are many significant common deviations:

Meter reading depth (normally be 20-40mm) is very limited comparing with wall thickness (can be 120mm or more). External moisture ingress often limited within outer part of timber frame, which is well beyond reading depth of most non-invasive moisture meters;

It is not uncommon to see some inspectors pointing moisture meters to tiled floor surface around shower waste and concluding shower leaks. But as long as showers are regularly being used, there must be some water siting between underside of tiles and waterproof membrane. That is absolutely normal and that is why we need waterproofing membrane for. In that case high moisture readings may not indicate any issue at all.


As long as dry, rotten timber will not result any high moisture readings. In reality due to weather conditions, repair works in the past, loss of clamping points due to timber dimension change as result of decay, rotten framing can be very dry and therefore may give some False Negative Readings.

Posted by buildersreport at 9:42 PM